She’s also a single mom with a two-year-old daughter, so she’s got her hands full.  Then last month, someone broke into her place while she was gone and stole her LAPTOP.

She was talking about it with a random guy who sat down at her bar last Wednesday while he was waiting for a flight.

He started talking about irony, so she mentioned that her computer got stolen right before Christmas.  Then she found out she couldn’t get normal textbooks this semester.  They were all online versions, so she NEEDED a laptop.

But now she won’t have to worry about it.  Because after the guy left, she realized he left her a $300 TIP with a note that said, “Enjoy your new laptop.  Hope it helps with school.”

She says it’s enough to replace her old laptop.  She knows the guy’s name, so she’s going to track him down online to say thank you.  And she’s still on track to graduate from nursing school sometime next year. 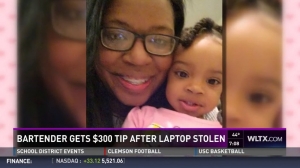